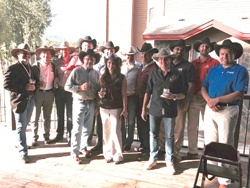 The FASCO America and BECK Fastener Group® sales and management teams came together on June 13th – 16th at The Lodge at Whitefish Lake, in Whitefish Montana, for this year’s International Sales Meeting. In addition to the meetings and our awards banquet, this year’s event included whitewater rafting, a hog roast, and the International Corn Hole Tournament, which has now become a highly competitive annual tradition.

Meetings included a review of the current state of FASCO America as well as information about the numerous new innovations coming down the pipeline. 2014 was also full of many exciting new product innovations from the BECK Fastener Group® including the introduction of our Roofloc®SCRAIL® System for metal roofing, F58 33° Nailer, and F44 Siding Nailer. I can’t give anything away, but the innovations to come in 2015 are nothing short of what you would expect from this forward thinking company.

It wasn’t all work though, we also experienced a wild whitewater rafting adventure at Glacier National Park followed by a hog roast where everyone came decked out in jerseys representing their favorite sports teams. After dinner, the competition heated up for the 2015 International Corn Hole Championship, which was won by FASCO’s Gary Ward and BECK’s Marcus Dickow. Congratulations guys!

Congratulations are also in order for the members of the FASCO sales team who were recognized for their extraordinary sales efforts in 2014. The highlight of the awards banquet was the presentation of the “BECK to the Future” award for greatest overall sales performance, which went to Terry Brady this year.

This annual International Sales meeting is a unique opportunity for everyone to get together to set goals that impact us all collectively, as well as individually. This year’s meeting strengthened us both as a team and as a company. We look forward to another great year in business helping builders everywhere complete quality construction projects quickly and easily, saving them time and money.

Michael Turner won the SCRAIL® Warrior Award for the most SCRAIL® sales in 2014.

Dan Hosch won the Tool Nerd Award for most tool sales in 2014.

Miguel Zepeda won the Territory Growth Award for largest territory growth from 2013 to 2014.