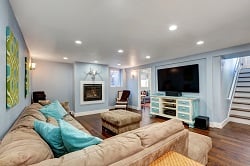 Before 1950, basements were barely considered part of the home. Most were not even finished with concrete and provided little to no use. Moving forward, basements became a more commonplace. In areas where basements were safe to build, they were finished with concrete and used as a laundry room, for extra storage, or perhaps a wine cellar. Today basements are an extension of the home and are indistinguishable from the living areas above. Modern basements are commonly used as entertaining spaces, game rooms, or home gyms. Here are the top five trends in basements this year.

Although not a new trend, open floor concepts are still incredibly popular. In small basements, open floor plans help maximize the space. Putting up walls and syphoning off the room will only take away from the limited amount of space that’s available. However, open floor plans are equally as popular in larger spaces. They allow for a sense of community in the room, which makes the space great for entertaining. It can still serve as a multi-purpose room, but all the different spaces will flow together.

The home theater is being incorporated in basements everywhere. Theater rooms are like mini movie theaters complete with plush recliners, stadium style seating, projector screens, and maybe even a snack bar. These rooms differ from the average living room TV setup due to the increased level of privacy. While these rooms do not vibe with the open floor concept, they can be a secluded area off of the common room.

For sports fanatics out there, creating a sports room is a great use for the basement. Complete with multiple TVs, a sports room will allow several different games to be viewed at once. The sports center is more secluded from the rest of the house, so others won’t be disturbed by rowdy fans at every touchdown. It might also include gaming tables or a kitchenette and bar for those who entertain large groups or host annual Super Bowl parties.

This is an emerging trend that really took off in 2018. Although, this is something that takes quite a bit of planning. Walkout basements are much easier to create when building a new house, but it is possible to create when remodeling. In doing so, one exterior wall must be exposed, which could even require a local permit. However, when it’s all said and done it can really transform the entire space. A walkout basement allows an influx of natural light that a regular basement can’t provide, as well as access to outdoor patios and living spaces.

With an aging baby boomer generation, it’s no surprise that in-law suites are becoming a popular basement feature. They can be used for in-laws that live with the family, or for those that visit frequently. It can be nice to have a private space for guests, especially around the holidays when tensions are running high. The size of the suite would really depend on the amount of space available, but a bedroom and ensuite bathroom is standard. For those with more space, an additional living space, kitchenette, or bar could be added inclusions.

The evolution of the basement has come a long way. What was once a dark and dreary storage space is now a focal point in the home. Those considering finishing or remodeling their basement have endless inspiration from the many trends circulating out there. The five trends above were the most popular of 2018, but there will surely be more on the horizon. For the DIY crowd renovating a basement can be a big undertaking, but not with the proper tools and fasteners like the SCRAIL® offered by FASCO America®. SCRAIL® is a fastener that drives two times faster than collated screws, which minimizes time investment while maximizing holding power, making sure your basement remodel lasts.