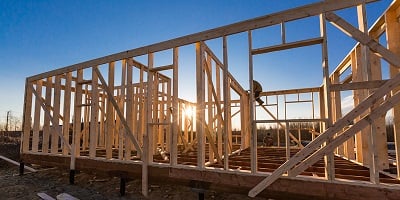 In the field of homebuilding, framing problems are a common concern. These issues are liable to result in callbacks on the job, and if they’re severe enough, they can turn what should have been quality construction into something subpar. So, what are some of the most common framing problems? Let’s take a look—along with some suggestions on how to solve them.

To correct this framing problem, it’s important to understand what spans are. These are the spaces between supports. For example, in a continuous span sheathing system, sheathing will be installed across three or more studs, which means there will always be at least two—or more—spans between studs. Simple spans are where there is only one span between supports.

Simple spans can represent a big framing problem, especially in flooring. Here, it’s all about deflection. In a continuous span joist system, when you place pressure on one span, it will bow downward somewhat—and that downward flex will be offset by upward flex in the adjacent spans. Single span joist systems have no deflection. Rather than weight distributing across spans, all of the weight distributes across only one span, which causes even more flexion, plus leads to shifting, creaking and groaning floors.

Speaking of joists, one issue that will get a homeowner to call you back quickly is a floor that just doesn’t feel quite right when they walk across it. Likely, the problem will be joists with inconsistent spacing between them, which leads to the floor feeling strange as you walk across it and it subtly flexes where you don’t expect it to. Make sure joists are installed with the correct spacing to keep deflection consistent and the new homeowner happy.

Overdriven fasteners and in general, fasteners that are incorrectly installed, can cause a lot of problems, including split lumber, aesthetic issues, or even difficulties installing other structural elements. For instance, overdriven fasteners through joists can emerge through the top of the joist, which is a problem that needs to be corrected prior to installing the subfloor.

4. Subcontractors Cutting Up Your Joists?

It’s a problem that happens often in homebuilding. Subcontractors—the plumbers, electricians, and HVAC installers, most notably, will have to come through to install the home’s vital systems, and that often means cutting through joists to create openings through which they can run ductwork, wiring or pipes.

The solution to this problem? Where openings must be made in the floor, use header joists end nailed to the cut ends of the regular joists. Since the cut joist is now weakened, the header joist is necessary to help transfer weight to neighboring joists, thus preventing too much flex in the floor near the opening.

Preventing common framing problems often means having the right tools for the job. If you’re working with joists, you’ll need a specialized nailer to ensure they’re installed properly. Check out the FASCO® (a member of the BECK Group) F70G Joist Hanger Nailer. This powerful cordless nailer from BECK has a positive placement nose for metal connector plates, making it easy to be accurate quickly! Click below to learn more about the cordless Joist Hanger Nailer from BECK.