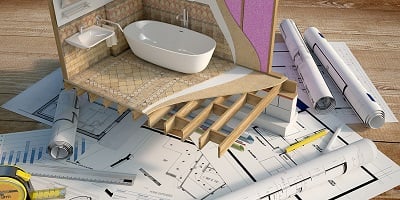 One of the biggest challenges when building a home comes is renovating bathrooms. Although they are likely to be some of the smallest rooms in a home, bathrooms can be tricky to renovate as you must account for the extremely high levels of moisture they must withstand on a daily basis. To make sure your bathroom project is off to a strong start, it begins with selecting and installing the best subfloor.

It’s important to first understand what a subfloor is and its importance. A subfloor lies beneath your finished floor to help keep the surface flat so the final floor can sit on top of it without compromising structural integrity. The subfloor should provide an even surface for installing tile or other flooring. It is important to ensure the material used for your subfloor is resistant to moisture because choosing one that is not can result in increased costs later and a lifetime of issues.

Exterior grade plywood subfloors are a popular choice for many contractors as plywood is generally resistant to moisture. However, extended exposure to moisture can cause the wood to warp over time, and if regular screws are used, instead of screws that are treated with an anti-rust coating, you may experience increased moisture in your subfloor, which will then ultimately need to be replaced.

Oriented Strand Boards (OSB) are similar to their plywood counterparts but are more structurally sound due to the way OSB is manufactured. OSB is produced by pressing strands of wood together using glue and hydraulics which results in a more structurally sound board that has increased water resistance. However, OSBs can swell around their edges if they meet any kind of moisture. As a result, many contractors prefer plywood over OSBs for subflooring.

Enhanced plywood remedies the issues of exterior grade plywood by adding a water-resistant coating during the manufacturing process. As a result, enhanced plywood resists many of the possible problems that are caused by moisture, and should last significantly longer than traditional plywood, which makes it a great choice for bathroom subflooring.

Finally, Enhanced Oriented Strand Boards are manufactured with water resistant resins that increase the water resistance of the final product. Unlike a standard OSB, an enhanced OSB will never swell around its edges, thanks to its water-resistant resin, making it one of the best choices for use in subflooring in bathrooms.

If you are gearing up to begin remodeling a home or you’re taking on new projects with your construction business, consider SCRAIL® SUBLOC® PRO for your next bathroom renovation. These fasteners are specifically designed for subfloor applications, thus settling the debate of whether to use nails or screws for subfloor installation. They were developed to also avoid subfloor squeaks that result from micro movement of the wood. They take less time to install than traditional screws, and can be installed with many conventional pneumatic nailers, including the FASCO® (a member of the BECK Group) line of nailers, making SCRAIL® SUBLOC® PRO perfect for use in your next bathroom renovation.