Construction Fasteners: A Look Back and a View Forward 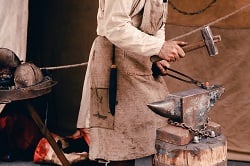 Today, we have a wide range of construction fastener options, from nails to screws, combination fasteners to staples, all in a variety of materials and finishes. They may be loose or collated and applied by hand or machine. If we lose a nail here or there it’s no big deal. However, it wasn’t always this way.

The first “nails” on record can be found in Ancient Egypt, around 3400 BC. They were made of wrought iron and bronze, and were hand-forged. Not the small fasteners we think of today.

The Romans made extensive use of nails, especially in their army operations, well into the Common Era (after 1 AD). They were valuable and used as currency, hence the term “penny nails”. The “d” on nails stands for the Roman coin denarius, or in English, the penny.

In the 1800’s, the nail creation process was mechanized. The largest manufacturer at the time was England. The American colonies initially struggled to get supplies of nails. Nails were pricey and hard to find, so much so that abandoned homes were deliberately burned down to allow simpler recovery of the metal from the ashes. Families would often have small nail manufacturing setups in their homes and would make them at night to barter with and use. Thomas Jefferson wrote, "In our private pursuits it is a great advantage that every honest employment is deemed honorable. I am myself a nail maker." (wikipedia)

In the 1860’s, steel wire nails were introduced. These were produced from continuous strands of wire that were cut into individual rods and the ends pressured into points and flat heads with little human intervention. These overtook the nail industry for their quick and cheap production and are the nails we know today.

Screws, on the other hand, can be traced to Greece in 3 BC. They were produced by hand to use as presses for olive oil. They were custom fabricated based on purpose. Again, the 1800’s proved to be the year of change for this mighty fastener as production became more automated. The threads and sizing were standardized so that screws could be used interchangeably.

In the early 1900’s, the SAE (Society of Automotive Engineers) Standard defined thread forms and specifications for threaded fasteners for general use. These standards were later adopted by ANSI (American National Standards Institute).  These screws required a pre-drilled hole to work.

In the 1960’s, self-drilling screws began to appear in the construction trade. As more developments were made in materials and production, the screw began to gain favor over nails in many applications. They tend to have a stronger hold and can be backed out and replaced without sacrificing strength. However, they cost more and take longer to install which has kept them from completely overtaking the nail in the construction industry.

Today, innovations in construction fasteners have taken us one step farther. In the last 20 years, we were introduced to the combination fastener, like SCRAIL®. SCRAIL® collated fasteners are incredibly versatile fasteners that can be driven with a pneumatic nailer at a rate twice as fast as collated screws and eight times faster than bulk screws. They offer dramatically increased holding power versus nails, while gaining the added benefit of easy adjustment and quick removal.

Modern fasteners are certainly a far cry from the hand-crafted nails of ancient times. We can only imagine what the future will bring.