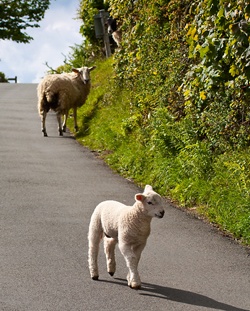 Bulls running down the streets of Baltimore.1 A cow strikes a car (and lived to tell) and causes $6,000 of damage.2 A loose goat in Queens, then two days later a cow is running free in New York City.3   Sounds like scenes from the movies, but it’s reality … and no town, big or small, can escape the possibility of escaping livestock.  These stories pop up on newsfeeds, and most people get a chuckle out of watching a policeman try to chase down a goat, but there can be severe consequences when livestock are not contained, as they learned in Oklahoma.

In Seminole County, Oklahoma, law enforcement receives at least two calls a day about loose livestock putting drivers in jeopardy. That's about 730 close calls a year, and some of those end in tragedy.   As reported by news9.com in August of 2009, a woman was killed in a car accident when loose livestock on the run crushed her car.  It was a preventable death if the livestock would have been contained properly.

Oklahoma, like many other states, has laws that impose strict liability on the owner of cattle, horses, sheep, swine, mules, burros, goats or any livestock that trespass onto the property of another and cause property damage, or cause harm to another person.  In many states, farmers could also be charged with a criminal misdemeanor for enabling the animal to run "at large."

We want to help farmers and their livestock by avoiding some common mistakes when installing fencing.  The Fence Stapling System from the BECK Fastener Group® is the perfect balance of superior holding strength and superior corrosion resistance. And with the added benefit of using a pneumatic stapler for ease and speed, we ensure your large wire fencing jobs are done with both the quality you need and the efficiency you require.  View the video to see to see it in action.