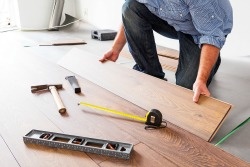 Sunken in or uneven floors can be a nuisance for homeowners, and in some cases, it can be downright dangerous. What many homeowners don’t realize is that many problems associated with hardwood floors can be traced back to the subfloor below it. Preparing the subfloor correctly is critical to a seamless installation, and poorly installed subfloors can cause problems for homeowners down the road. Here are some common problems associated with subfloors and solutions to help you restore them:

The SubLoc® PRO SCRAIL® was developed to avoid subﬂoor squeaks. The upper threads grab into the deckboard and prevent micro movement of the wood even in the event of wood shrinkage.

The aggressive double threads are designed for squeak-less subﬂoors because no smooth shank between the upper and lower threads prevents board movement that can lead to unwanted noises. And the good news is that the SubLoc® PRO SCRAIL® offers the hold of a screw with the ease of use of a nail and can be quickly driven with a pneumatic nailer.

Looking for even more tips on how to install floors perfectly every time? Download the eGuide: The Key to a Squeak-less Subfloor